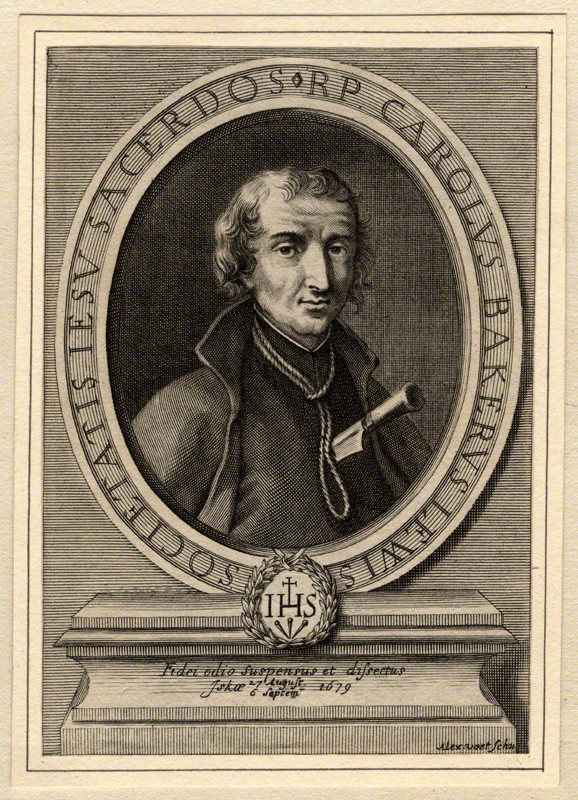 We remain in the grip of the Titus Oates Conspiracy of the late 1670s and meet David Lewis, the last Welshman to be slain for the Faith.

Unlike his cousin St. John Kemble, Lewis was not born a Catholic; his mother was Catholic, but his father was not. Lewis’ siblings were brought up in the faith, but he was not (he was later reconcilled to the Church at the age of 16 in Paris).

He was educated at the Royal Grammar School in Abergavenny, where his father was headmaster, after which he entered the Middle Temple to study law. After the death of his parents (possibly to ensure that they would suffer no harm consequently) he went to Rome, and there entered the English College.

He was to remain in Rome for some years, under the name Charles Baker, becoming Spiritual Director to the college after priestly ordination, and being enrolled in the Society of Jesus in 1644.

In 1648 Fr David was sent back to the English mission, and in particular to South Wales, where the Jesuits had two farmhouses. He was to spend the next 31 years ministering to Catholics in the area, earning for himself the title “Father of the Poor”.

In November 1678 he was arrested before saying Mass at Llantarnam Abbey, the place being stormed by six armed men and John Arnold, a priest hunter and co-conspirator with Titus Oates. He was shown to the populous as “the pretended Bishop of Llandaff”, which must have come as something of a surprise to those who knew him. His life then follows the pattern of all of those captured and interrogated as part of the Oates plot: imprisonment locally, transferred to Newgate Prison, before being “questioned” by Titus Oates and others, then transferred back home having been found innocent of any involvement, to be tried for High Treason and to be executed.

Except the plotters clearly thought that Lewis knew something: he was offered his freedom and indeed a financial reward in return for implicating others in the plot. Obviously this did not come about, and in his speech before he was executed he remarked: “discover the plot I could not, for I knew of none, and conform I would not, for it was against my conscience”.

On the 27th August, 1679, after a wait of some three months after sentencing he was hanged drawn and quartered. So upset were the people of Usk that the town’s carpenters refused to build the gallows, and went into hiding. Eventually a convict was constrained to build it, but did the job badly, and the gallows were not tall enough to hang a man, so had to be dug out underneath. Said convict had to run for his life after the townsfolk threatened to stone him. A blacksmith was bribed 12 crowns to hang Lewis, but afterwards was ostracised and, on the loss of his business, was forced to turn to petty crime.

On the gallows Fr Lewis made a long and moving speech (subsequently published), protesting his innocence against many crimes, and urging the crowd to forgive his executioners as he did. A Protestant man held his hand throughout the execution, ensuring he was dead before being cut down. He was also spared drawing and quartering, and was buried near the entrance of the Anglican Parish church in Usk; further testament to the esteem and respect in which he was held by the people of South Wales.